The grace of nature and history

The grace of nature and history 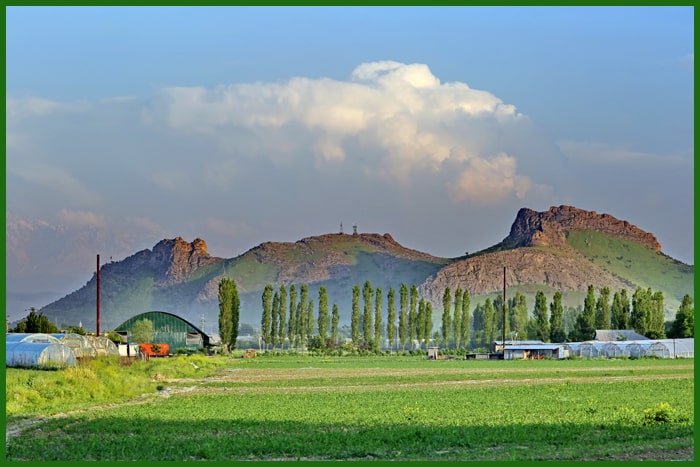 Tour’s name: The grace of nature and history

Day 1: Bishkek – Ala Archa – Bishkek
Our guide will meet you at the airport after your arriving and you will be transferred to the Bishkek, capital of the Kyrgyzstan. It will take about 30 minutes. Firstly, there will be city tour where you will get to know the city better visiting main places as Pobeda Square (Victory Square), Duboviy Park (Oak Park), Central Ala-Too Square, Old Square, National Philharmonic, and many other locations. After first part we will drive to Natural Ala Archa gorge in the Tian Shan mountains established in 1976 and located approximately 45 km south of the Bishkek. During Soviet Period it was allowed only for V.I.P. people to visit this park. You can walk to the top in order to enjoy panoramic view. Further we will come back to the capital city. Night is in a hotel.

Day 2: Bishkek – Burana – Chon Kemin
Today we will go to the well-known Asian Bazaar. While visiting it, you can freely take photos of crowded place. You will be surprised an abundance of different products. Then the second part of the tour will start. You will drive to Chon Kemin, is the longest gorge in Kyrgyzstan. On route firstly we will involve Burana Tower (an 11th century it was minaret) and open air museum of Balbals (small stone statues). Later you will have  horse riding tour in the stunning Chon-Kemin gorge with an experienced guide. It will take 3 hours. You will be able to observe beautiful sceneries, enjoy the view of magnanimous mountains, forests and river. Also, it is a great way to become acquainted with the customs, traditions of kyrgyz people from the local guide. It is also possible to go high on the top to panorama. Overnight is in a hotel.

Day 3: Chon Kemin – Issyk Kul lake northern shore – Karakol
In the morning we will drive to Issyk Kul Lake. Issyk-Kul is one of the largest lakes in the world. The natural attraction of Kyrgyzstan is called the precious pearl of Asia. The reservoir is located in the North-Eastern region of the Republic, surrounded by the mountain ranges Kungei-Ala too and Terskey Alatoo, belonging to the Tien Shan. In terms of water purity, it ranks second after lake Baikal. The high salt content and mild climate do not allow the lake to freeze even at sub-zero temperatures. Further we will visit Karakol town, also there is oldest stone patterns – petroglyphs. We will go to the Dungan mosque which was constructed without metal nail. The day will end by earliest wooden Orthodox church. Then you will have a dinner in a local restaurant. Night is in a hotel.

Day 4: Karakol – Jeti Oguz – Issyk Kul southern shore – Kochkor
In the morning we will drive to Jeti Oguz gorge. It was formed by red rocks and prominent thanks to this. Other word it is called Seven Bulls”. Surely you will see the Broken Heart Mountain. You are also free to go to the top and see beautiful panorama view. Further we will drive to Kochkor crossing Bokonbaeva village where a loal eagle-hunter will wait us to demonstrate how such a bird hunts hares and foxes. It is named as a traditional nomadic hunting which was saved from ancient times. Night is in a guest home.

Day 5: Kochkor – Son Kul
Today as soon as you have a breakfast we will go to Sin Kul which is on the second place on largeness in Kyrgyzstan filled with crystal clear mineral water, it is located in the heart of the inner Tien Shan at an altitude of more than three thousand meters. Since ancient times (as evidenced by rock carvings found on the shore of Son Kul), the meadows bordering the lake were used as pastures for animals, and the coast served as a camp for nomads who were engaged in fishing and cattle breeding. To this day, fishermen come here in the summer, shepherds drive herds and flocks to these places and live in yurts with their families until the cold weather comes. All of this stunning nature we will discover during our tour. Dinner and night is in a yurts – nomadic ancient dwellings made of a wooden skeleton covered by felt matter.

Day 6: Son Kul – 33 parrots Pass – Kochkor – Bishkek
After morning meeting with local people we will return to Bishkek city. While coming back we will across 33 parrots pass. In Kochkor village we will spend some time with Kyrgyz family. They will demonstrate you production of national felt carpets. You will be able to see small museum with handmade goods. There are wolfish coats, silver decorations, horse saddle things, carpets etc. Then we will continue our way to the capital of Kyrgyzstan. Overnight is in a hotel.

Day 7: Bishkek – Osh
In the morning you will have a flight to the southern capital of Kyrgyzstan – Osh. In Osh city you will visit a popular and unique place – Suleiman Mountain. The mountain is a five-domed limestone outcrop, elongated from West to East. It is more than 1,140 m long and 560 m wide. It has had a sacred meaning since ancient times, as evidenced by the preserved petroglyphs. There is a museum of its history on the mountainside. It is also called as holy mountain cause histical aspect related with Suleiman prophet. Further we will continue our tour with Asian Bazaar where you can find a lot of interesting goods and discover lively people moments. Night is in a hotel.

Day 8: Osh – Guliston border – Khujand
Today we will keep going to Tajik border passing to Khujand city. There you will meet with Tajik guide and go together to Khujand city. Khujand Tajikistan is one of the oldest cities in Central Asia. The Persians, Greek settlers, Scythian tribes, the Arab caliphate, the Mongol Hordes and the Soviets all ruled this city at some point in time. Khujand was established by Cyrus the Great around 544 BC. Also it should be mentioned that city is located on the Syr Darya River at the beginning of Fergana Valley. The population is approximately 149000. It is well-known as the capital of northernmost province called Sughd. Today you will vist following places: Cultural Palace of Khujand where was chosen first president, then stunning Central Mosque. Overnight is in a hotel.

Day 9: Khujand – Iskanderkul Lake
In the morning you will be transferred to Iskanderlul Lake and in addition see amazing waterfall. Iskanderkul is a mountain lake glacial origin in Tajikistan's Sughd Province It lies at an altitude of 2,195 metres on the northern slopes of the Gissar Range in the Fann Mountains. Triangular in shape, it has a surface area of 3.4 square kilometres and is up to 72 metres deep. Formed by a landslide that blocks the Saratogh river, the outflow of the lake is called the Iskander Darya, which joins the Yaghnob River to form the Fan Darya, a major left tributary of the Zeravshan River. Moreover Tajikistan is known as country with big water reserves. Night is in a hotel.

Day 10: Iskanderkul – Dushanbe
Today you will be transferred to Dushanbe by Anzob pass (3 372m) and tunnel of Inticlol. Our tour will full of photo making places cause of wonderful mountains. Further guide will start city tour. You will see Rudake Park, National library, White House, National state seal, and House of parliament. Meanwhile we will see Ministry of Inner Affairs and the biggest National Flag in the world – 165 m high pole, 30 m wide, 60 m long. After it, you will have a lunch. Following which our next stop will be Gurminj Museum of traditional musical instruments. In the evening you will have a Tajik meal in the restaurant. Night is in a hotel.

Day 11: Flight
You will be transferred to the airport in the morning.