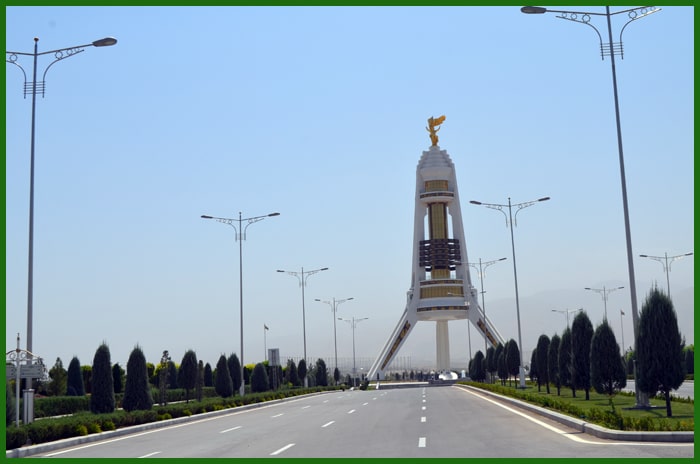 Day 1: Almaty
Our guide will pick you up from the airport in Almaty, the strongest megalopolis in Kazakhstan. Your first act will start with the Medeu Gorge. It is the huge Medeo dam, that protects the city from destructive mudflows formed on the tops of the western Tian Shan mountains. From the top of the dam, at the altitude of 1733 meters above the sea level, you will have a chance to enjoy view and breath pure mountain air. Also a ropeway will be excellent attachment to your tour which direct you to Shymbulak ski resort area. After your coming back, you will see The Almaty Television Tower, is a 371.5-metre-high (1,219 ft) steeltelevision tower built between 1975 and 1983, located on high slopes of Kok Tobe mountain. Further you will drive to the city tour and firstly you will visit Almaty Museum where guide will tell you the historical aspects of the second capital of this country. Next stop will be one of the oldest parks in southern city named as Park of 28 Panfilov Guardsmen. Moreover there is located Zenkov Cathedral. Afterwards you will visit the green Bazaar – famous place for various type of shopping. Night is in a hotel.

Day 2: Almaty – Charyn – Almaty
After morning meal in the hotel, you will drive to Charyn Canyon. It is a canyon on the Sharyn River in Kazakhstan (200 kilometres) east of Almaty. The Canyon depth is 200m. The height of the bluff mountains of the Canyon reaches 150-300m. The Canyon itself represents a monument of nature formed with sedimentary rocks aged more then 12 million years. The landscapes are virtually miraculous there. Charyn Canyon is getting scarlet, pink and orange colors at sunset when the sun is disappearing behind the horizon. There is quietude around, and the Charyn river bobbles washing against the cliffs can only be heard from below. This sight will leave nobody indifferent. The landscape variety of Charyn Canyon accounts for a flora and fauna diversity. Over 1500 plant species, 17 out of which are entered in the Red Book of Kazakhstan, 62 mammal, 103 nesting bird and 25 reptile species are found there. All conditions for a pleasant rest are created there for tourists. The Park staff will take them around and narrate about the canyon history in detail. Afterwards the night is in a hotel.

Day 3: Almaty – Issyk Lake – Almaty – Bishkek
Today our tour is going to begin with Issyk Gorge of Trans-Ili Alaltau. It is located along the Kildja tract which played significant role during trade caravns. In addition, we will see State Historical and Cultural Museum-Reserve “Issyk”. There will be various expositions related to the history and culture of Saka period. It is directly connected  with Golden Man and golden items, ceramics from ancient time, weapon, appurtenance for horses and Saka burial mound. Further you will go to the Issyk Lake. It is estimated that the lake was formed in about 8-10 millennia, as a result of a catastrophic earthquake that caused the collapse of the right slope of the gorge. After the collapse, the gorge was blocked by a dam with a height of about 300 meters. The purity and transparency of the water was such that at a depth of up to 10 meters, on a Sunny day, you could see the bottom. Every explorer who visited these regions considered it his duty to visit the lake. Afterwards you will transfer to the city where begins departure to Bishkek. Overnight is in a hotel.

Day 4: Bishkek – Ala Archa  - Bishkek
Our tour will start from the Bishkek city, capital of Kyrgyzstan. You will visit Pobeda square (Victory Square), Duboviy Park (Oak Park), Central Ala-Too Square, Old Square, National Philharmonic, and different interesting places. After guided city tour you will transfer to Ala Archa. Ala Archa National Park is one of the best daytrips from Bishkek in Kyrgyzstan. It is only 40 kilometers south of the capital and therefore a very popular escape from city life for both locals and tourists that are looking for some fresh air and nature. Ala Archa national park lies in the Ala Too range of the Kyrgyz Tien Shan mountains and is home to several glaciers and river gorges. Wildlife in Ala Archa National Park includes mountain goats, deers, marmots and the extremely rare snow leopard. Locals mostly come in the weekends to have a picknick and make leisurely walks along the rivers. However, there are some more challenging hiking trails as well that bring you to spectacular high altitude mountain sceneries. Further we will come back to Bishkek. Night is in a hotel.

Day 5: Bishkek – Burana – Chon Kemin
Today our first place is Asian Bazaar. You will be surprised by observing lively moments of people and take photos of such kind of energy life. The bazaar will seem as noisy but you will forget about it after seeing various fascinating stuff to buy. After breakfast you will drive to Chon Kemin gorge. This valley, one of the most picturesque localities in the territory of Kyrgyzstan represent a unique natural complex comprising a gorge, valley and the Chon-Kemin River flowing along the Chon-Kemin water gap. Then our direction will be Burana Tower which was minaret in 11th century. There is also located an open air museum of Balbals, ancient tombstones that people in Central Asia used for the significant members of their communities. After tour we will climb to Chon Kemin gorge and have about three hours of horse riding. Our trip is dedicated with mointain forest and wonderful panorama view. Overnight is in a hotel.

Day 6: Chon Kemin – Issyk Kul lake northern shore – Karakol
Today our tour will be vivid by visiting pearl of Kyrgyzstan, incredible Issyk Kul Lake.It is an endorheic lake in the Northern Tian Shan mountains in Eastern Kyrgyzstan. It is the seventh deepest lake in the world, tenth largest lake in the world by volume (though not in surface area) and the second largest saline lake after the Caspian Sea. Issyk-Kul means "warm lake" in the Kyrgyz language; although it is surrounded by snow-capped peaks. Meanwhile we will learn about petroglyphs, rock carvings made by pecking directly on the rock surface using a stone chisel and a hammerstone. As soon as we transfer to Karakol, we will see the Dungan mosque which was built in Chinese style and without any metal steel nail. Then our trip will continue in the old wooden Orthodox Church. Your dinner will be in a restaurant. Overnight is in a home stay.

Day 7: Karakol – Jeti Oguz – Issyk Kul southern shore – Kochkor
Today you will transfer to Jeti Oguz, is a district of Issyk-Kul Region in north-eastern Kyrgyzstan. It is famed due to red rocks formations. Moreover, there is Broken Heart Mountain with interesting story which will be tell by our guide. On request you will be able to go to the top of mountain. It will take about 20 minutes. There is amazing panorama view. Further we will drive to Kochkor, but firstly have a break in Bokonbaeva village, where eagle-hunter will wait you. He uses this bird on hunting hares and foxes. Let is say it “traditional nomadic way of hunting”. Night is in a guest home.

Day 8: Kochkor – Son Kul
Today we will begin our road from Son Kul Lake. Son-Kul is one of the most famous alpine lakes and mountain meadows in Kyrgyzstan. At an altitude of 3013 meters (9895 feet) above sea level, Son-Kul is a startlingly blue lake surrounded by wide, fertile meadows that have long been used by nomadic herders for their animals. There are a number of yurt camps where visitors can stay for a taste of traditional nomadic culture, and the surrounding mountains are great for horseback rides or treks. You will freely investigate natural area of such a wonderful lake. Dinner and night is yurts. It is  a type of round tent with a wooden frame, used traditionally as a home by some Central Asian people.

Day 9: Son Kul – 33 parrots Pass – Kochkor – Bishkek
We will spend some time with local people and then have a direction to Bishkek. The length of the road is approximetly 3133 meters. In addition, in Kochkor you will learn something new from Kyrgyz family. They will show you the way of making national felt carpets. There is situated a small museum with handmade stuff. You can find there different types of silver decorations, wolfish coasts, decorations relating with horse, surely carpets and other interesting things. After that, we will return to the capital of Kyrgyzstan. Overnight is in a hotel.

Day 10: Bishkek – Osh
Today morning you will be transferred to the airport. There you will have a flight to the southern capital of Kyrgyzstan – Osh. After arriving we will walk to the popular and unique place named as Suleiman Too (Solomon’s Mountain). It is located in the main center of Osh and was once a major place of Muslim and pre-Muslim pilgrimage. The rock rises abruptly from the surrounding plains of the Fergana Valley and is a popular place among locals and visitors, with a splendid view. Suleiman (Solomon) is a prophet in the Qur'an, and the mountain contains a shrine that supposedly marks his grave. Women who ascend to the shrine on top and crawl though an opening across the holy rock will, according to legend, give birth to healthy children. The trees and bushes on the mountain are draped with numerous "prayer flags", small pieces of cloth that are tied to them. Further we will be in Asian Bazaar and go to a hotel.

Day 11: Osh – Guliston border – Khujand
Today you will be transferred to Tajik border in oerder to visit Khujand city. Tajik guide will meet you after crossing the border. It is the second largest city and located on the Syr Darya river at the beginning of the Fergana Valley. Khujand is one of the oldest cities in Central Asia, dating back about 2,500 years. In addition, it is the capital of Tajikistan's northernmost province and was a major city along the ancient Silk Road. At the end we will visit Central Mosque and go the hotel.

Day 12: Khujand – Iskanderkul Lake
In the morning we will keep going to Iskanderkul. This lake is located between spurs of Hissar range. It is 2.5 km long and 1 km across, being 72 m deep at its deepest, it sits at an altitude of 2,255m above sea level. Turquoise, calm and surrounded by great ranges of Fann mountains its known far beyond Tajikistan borders. It is one of the most spectacular and picturesque places in Fann mountains. There are almost no aquatic life in the lake due to high concentration of minerals and only small loach survive in such waters. Furthermore we will see waterfall. Overnight is in a guest home.

Day 13: Iskanderkul – Dushanbe
Morning transfer will be by Anzob pass (3 372 meters) and tunnel of Isticlol. Our way will be full of mountain views. We will stop to make photos. Afterwards you will have city tour. We will visit following places as Rudake Park, National library, White House, National State seal and House of parliament. Then there will be waling through National Park. It is one more great opportunity to make photos. For instance: of Ministry of inner Affairs and the beggest National Flag in the world (165 meters high pole, 30 meters wide, 60 meters long). After that there will organized lunch in Central Museum. Excursion will end with visiting Gurminj Museum of Tajik traditional instruments dedicated with music. In the evening you will try Tajic cuisine. Night is in a hotel.

Day 14: Flight
In the morning is your transferring to the airport.